Sunday 19th September sees the return of the Memorial Triples Tournament, this year being held at Carlton Park Saxmundham.

Please be at the venue for 9:15 ready for a short briefing.

On Sunday 12th, Martin did a live Facebook draw to decide the teams, taking a player from each of the three 'Barrels' to ensure the teams are as balanced and random as possible. 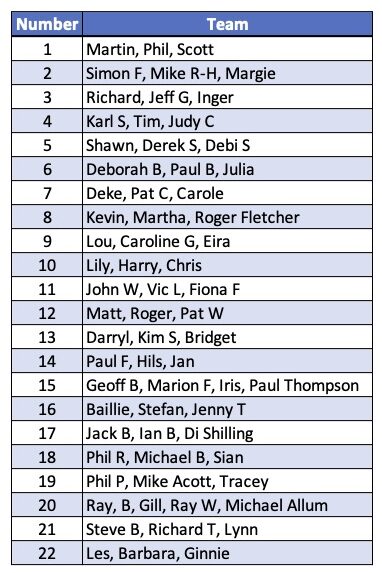 The format will be three 'seeding' rounds in the morning, after which teams will be seeded based on our usual system of Games Won/Drawn/Lost then points difference then points for.

Seeds 1 to 8 will go through to the Gold Knockout, seeds 9 to 16 to the Silver Knockout and seeds 17 to 22 will go into the Bronze Knockout.

In the Gold and Silver, the 4 losers of the next round will go into the Gold Consolage and Silver Consolage. In the Bronze Knockout, seeds 19 to 22 will play off, with the winners joining seeds 17 and 18 in the Semi-Final, the losers will be out of the competition. If this is as clear as mud, don't panic, we will tell you what to do on the day.

All games up to the finals will be timed at 50 minutes, when the bell rings you finish the end you are on and play one more. An end is deemed to have finished when the last boule of the end has been played.

Here are the list of the seeding matches with the estimated start times.

We look forward to seeing you there!